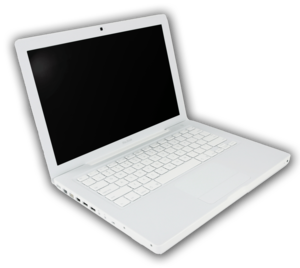 As everyone probably already knows, the older white MacBooks have this tiny little problem that Apple doesn’t like to admit. Yes, i’m talking about the case cracks which turn your pristine white macbook into a ‘Crackbook’. Well of course I had this happen to me, but didn’t think that there was anything I could do about short of paying for the repair myself. I wasn’t too keen on doing that, so I just let it slide and became best friends with a bottle of crazy glue to help hold it together. This worked for a long time and probably would have worked for much time to come. However, my father James found something out while getting the cracks on his iPhone fixed. In a conversation with one of the technicians at the apple store he found out that apple was in fact starting to replace the cracked palm rests and outer shells of these white macbooks. This got my ears perked up, so this morning I had James take my macbook over to the apple store on the way to work. Now, i had called earlier in the week to see if my macbook was eligible for this replacement program, and i got the standard apple response ‘well, if your computer falls within a certain serial number range…’. I couldn’t actually get anyone at apple to tell me what range this was, so i figured what the heck, i’d just bring it in. When James brought it in this morning, he was told ‘if we see cracks, we fix em’. This was fantastic and as we speak my computer is getting surgerized and having its cracks replaced. The moral: If you’ve got a crackbook, go get it fixed for free. Apple is happy to help you out.